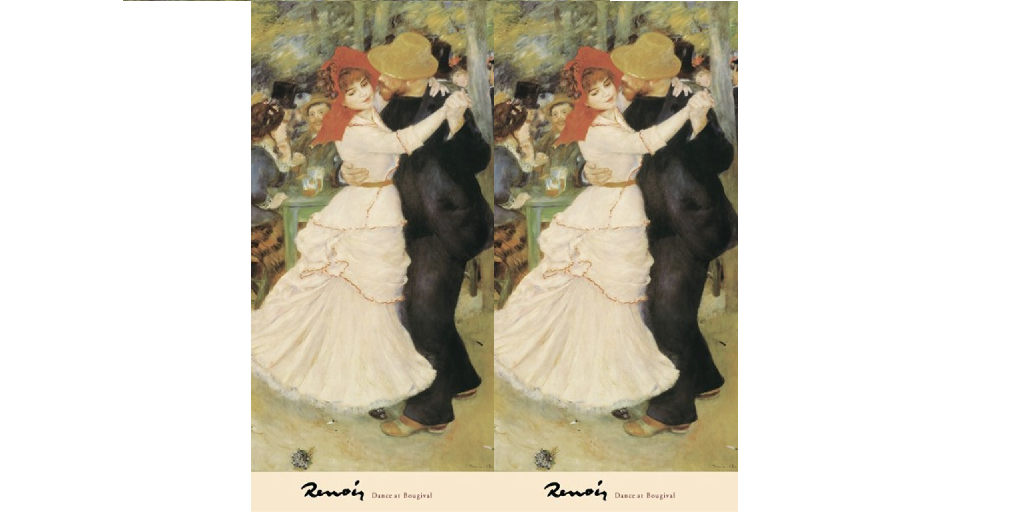 One of the most interesting aspects of fine art is how artists can create the insinuation of details from elements that are so far removed, even abstract, from their subject matter.

In few other movements is this as apparent as it is in impressionism, in which elements of open composition and blatant, unblended brushstrokes are typical. Truly, though the impressionists as a whole sought to capture – faithfully – the spirit of light within a scene, their depictions of the composition itself were far more suggestive than realistic.

This effect of “creation from insinuation” (rather than realistic depiction) is readily noticeable even in reproduction art posters and prints. Consider, for example, Claude Monet’s “Fisherman’s Cottage on the Cliffs at Varengeville”; it takes only a moment of reflection to absorb it.

One does not need to strain the faculties in interpretation. It is a veduta of a fisherman’s cottage on a bluff overlooking the sea. Yet, the practiced eye will quickly notice that, despite the apparent nature of the scene, dissecting its several elements will not yield the expected sum of parts.

In the foreground, Monet has, in short, scratchy strokes of green, yellow, and neutral brown, assembled a host of scrub and brush, with a few dots of color, likely signifying a few errant blossoms. Yet, by removing the element of the cottage, it is not at once apparent what the foreground comprises.

The same could be said of the background with its many “sailing vessels.” True enough, the bright blue level of the horizon is a “real” enough depiction of sea and sky – but it is through vague familiarity with sailing ships alone that the viewer could possibly extract as much from the scene. Said ships are little more than itinerant dabs of white pigment on the canvas, and nothing more. In any other composition, they would as like as not be scattered bits of porcelain or seashells. Even the clouds in the sky have little in common with the true icons that inspired their artistic portrayal here.

Yet here, it is immediately apparent that they are sailboats, and there can be little doubt as to that matter. One of the most captivating components of Monet’s “Fisherman’s Cottage on the Cliffs at Varengeville” is that the artist has been able, almost solely through color and arrangement, to produce a scene that a casual viewer nearly immediately interprets as a cottage overlooking the sea. The most insignificant tweak of color or a shift in the arrangement of the scene’s general shapes would suggest a scene entirely different, if not unrecognizable.

What is interesting and most likely intentional is that the one area of the painting in which any semblance of realism exists is in the capture of the cottage, and even there it is sparse. A few nearly sharp lines and angles, signifying walls, corners, rooftop, chimney, and windows, are all that the painting holds.

And yet, it most certainly is a cottage. To drive this latter point home, Monet has used bright complementary colors in the cottage and rooftop – oranges, which, by their opposition to the blue of the sky and sea, truly glow with a larger-than-life presence.

“It is a Fisherman’s Cottage on the Cliffs at Varengeville,” Monet seems almost to say, despite the fact that his brush has muddled almost every trace of realism in the scene, and that takes true skill.

High-Quality Art Posters & Prints Online at MFAShop.com
All that’s left, if your interest in the titular piece has not waned, is to add one of these fine art prints to your home. Boston’s Museum of Fine Arts carries a large collection of fine art posters and prints in its online catalog, MFAShop.com.

Take a look through their collection via the link above, which contains highlights not only from Claude Monet but also from other famous impressionists such as Vincent van Gogh and Gustave Caillebotte. There’s something in their collection of decorative art for any home.