Alienware Vs. Asus, Which Laptop is Best for Gaming 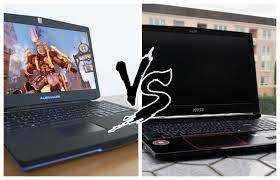 Alienware and ASUS are known for their premium laptops, which excel in gaming and professional markets. When comparing prices, features, and aesthetics, ASUS is superior to Alienware.

This article will compare and contrast the most recent models from these two leading laptop manufacturers in their characteristics, build quality, and design.

Alienware is an American company that makes premium portable and stationary gaming PCs. The company’s distinctive alien head logo takes the form of a UFO, and the accompanying neon lights have become instantly recognizable symbols. This Dell subsidiary has received multiple honors for its high-performance laptops, making it a household name among gamers.

Alienware laptops are distinguished by glossy exteriors, bright lighting, and distinctive boxy designs. Forget about the bulky, plasticky old Alienware laptops. The Alienware Area-51 R2 is one such modern example, and it has a width of only 402.6 mm (15.7 in.) and a front and back height of only 27.65 mm (1.09 in.) and 31.22 mm (1.23 in.), respectively (15.85 in.). The Alienware Area-51 may be larger than competing models, but it’s ergonomically made and has programmable lighting so gamers can make it their own.

The graphics on Alienware laptops are among the highest available. The best laptops, like the Alienware Area-51m R4, have dedicated graphics RAM of up to 8GB GDDR6 and an NVIDIA GeForce RTX 2020 graphics card. The high-powered visuals allow players to experience 4K graphics and virtual reality features.

Regarding gaming computers, Alienware is unrivaled in terms of its dazzling hues. Alienware Area-51m R4, one of its best models, has a 15.6-inch Full HD (1920 x 1080) IPS panel display with HDR and a 144-hertz refresh rate. The gameplay is fluid and lag-free, thanks to NVIDIA G-SYNC and cutting-edge Optimus technology. Anti-glare, matte panels, standard on Alienware laptops, improve readability in direct sunlight.

ASUS is a hardware and technology firm based in Taiwan that produces laptops, desktops, and accessories for gamers at reasonable prices. As a result of its groundbreaking innovations and high-quality offerings, ASUS has become a household name in the tech world. ASUS’s top-tier gaming laptop brand, the Republic of Gamers (ROG) series, is known for its robustness and processing power.

ASUS’s lineup of gaming laptops includes options for players of varying budgets and technical proficiency. The ROG Zephyrus G15, for instance, offers premium performance at a budget price. The laptop’s NVIDIA GeForce RTX 2060 discrete GPU and dedicated memory make for a buttery-smooth gaming experience thanks to the laptop’s robust Ryzen 7 processor. If you can afford it, the ASUS ROG G703x is the better gaming laptop, boasting an overclocked NVIDIA GeForce RTX 2080 GPU and a next-gen processor with up to nine processing cores.

The ROG Zephyrus GX501 features a 15.6-inch, Full HD (1920 x 1080) IPS panel display with 100% sRGB color gamut and 178° wide-view technology, making it a top-tier ROG series laptop. The screens on 100 dollar gaming laptops are vivid and ultra-slim, allowing for a smooth and immersive gaming experience. The screen quality of most gaming laptops is subpar, especially when seen under direct sunlight. The ROG Zephyrus GX5, meanwhile, has anti-glare technology that efficiently lessens glare and eye fatigue without diminishing color accuracy.

Gaming laptops from ASUS come equipped with many ports so players can immerse themselves in their chosen titles. Regarding connectivity, the ASUS TUF Dash 15 has you covered. It is equipped with a full complement of ports, including a Thunderbolt port with a display 1.4 port, three USB 3.2 ports, and an RJ45 LAN socket. MiniPCIe slots on some ASUS gaming laptop models allow players to attach additional peripherals. The ROG XG Station 2 external graphics dock lets players connect a desktop GPU like the RTX 2080 or GTX 1080 for enhanced processing capability.

When playing games, a gaming laptop needs to be able to handle massive game files, which means it needs a quicker processor and more storage space. High-capacity solid-state drives (SSDs) are a worthwhile upgrade for gamers who want to minimize wait times when starting up or playing their games. Most ASUS gaming laptops have a hard drive with 256GB, 512GB, 1TB, or more capacity. Faster boot and game loading times are made possible by the 1TB + 1TB NVMe PCIe RAIDO SSD built inside the ASUS ROG Strix SCAR 15 G532. The 16GB DDR4 memory architecture is great for gamers because it allows them to make the most of their laptop’s storage and processing power.

Is Alienware Or ASUS Better?

ASUS laptops are superior to Alienware models because of their cutting-edge hardware, solid construction, and stylish looks. Unlike Alienware’s bulkier and boxer computers, ASUS gaming laptops mix the capability of a gaming laptop with an elegant aesthetic.

One of the most recent and greatest ASUS gaming laptops is the ROG Zephyrus range, spearheaded by the ASUS Zephyrus G15. The Zephyrus G15 can run even the most demanding AAA titles thanks to its powerful AMD Ryzen 9 processor and GeForce RTX 2060 graphics card. The laptop is portable and light, coming in at just 4.6 pounds. Its slim profile and ultra-narrow bezels around the screen contribute to its modern appearance.

ASUS Vs. Alienware For Gaming

The latest games place a heavy load on laptops, necessitating powerful technology. For an immersive gaming experience, players want high-performance laptops with top-tier graphics, CPU, and display. Both portability and affordability are essential for laptops aimed at casual gamers. Thus they should have substantial battery life for use on the road.

ASUS gaming laptops are among the finest regarding the graphics processing unit (GPU) and central processing unit (CPU) speed. The newest AMD Ryzen 9 processor and the RTX 2060 graphics card are found in the ROG Zephyrus G15. The Alienware m15 R5, the company’s newest model, is powered by a lower-quality AMD Ryzen 7 processor compared to the higher-quality AMD Ryzen 9 processor found in the Alienware m15 R5.

When comparing Alienware vs. ASUS, Alienware has longer battery life. Game players won’t be able to go very far from an electrical socket since ASUS’s batteries only last for up to 6 hours before they need to be recharged. Depending on parameters like screen size and computing capability, the typical battery life of an Alienware laptop is between 6 and 7 hours. Although throttling and overheating are less common on Alienware gaming laptops, they are nonetheless possible.

The ASUS Zephyrus G15 is a tiny, lightweight gaming laptop that doesn’t skimp on performance or power despite the industry norm of thick and heavy gaming laptops. ASUS laptops are more convenient to carry along than those made by Alienware. With its light weight of only 4.6 pounds, the ROG Zephyrus G15 is ideal for gamers who frequently travel from one LAN event to another. Weight-wise, the Alienware m15 comes in at roughly 6.09 ounces.

The ASUS brand of gaming laptops is the way to go if you want a powerful machine. Compared to Alienware laptops, ASUS offers superior memory and storage capacities and higher resolution screens. The laptops are thinner, lighter, and more transportable than Alienware computers and offer a wide range of networking choices. In terms of price, ASUS offers more affordable versions than Alienware, yet both companies’ laptops have cutting-edge hardware.